Building a Keyboard computer from a Raspberry Pi

Here is another great idea for using a Raspberry Pi as a low power, low profile computer. The guys over at Hack A Day found this cool rundown about cramming a Rasp Pi into a nice Cherry mechanical keyboard. 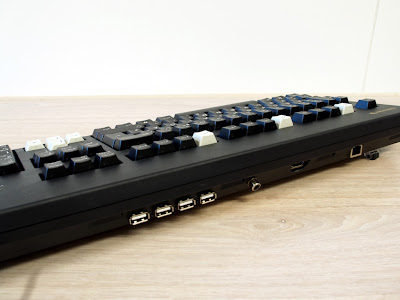 The original page is in German, but the google translate is good enough to read most of what is going on, and the idea is simple enough that you can infer from pictures.

Basically the idea was to add an ethernet extender and an HDMI extender to the keyboard so that cables could all be routed in the same direction. The product turned out to be a very cheap and very slick implementation of a Rasp Pi embedded device with every day functionality. The only other thing that I would have liked to see, is an extension of the SD slot so that new images could be flashed easily and OS's could be changed rapidly.

Via Hack A Day

Posted by Matt at 1:16 PM
Email ThisBlogThis!Share to TwitterShare to FacebookShare to Pinterest
Labels: case, DIY, how to, keyboard, ras pi, raspberry pi